Cuchen VS Cuckoo Rice Cooker – Which One Best For Me?

If you want to lead an easy and healthy lifestyle, it’s no brainer that you have to simplify the kitchen works. Getting a rice cooker is a step that shrinks your kitchen time to quality time for your family or work. However, When it comes to choosing the best rice cooker, many high-end brands are specialized for the job.

Here is a quick navigation guide to the whole article for the Cuchen vs Cuckoo rice cookers along with their features:

If you want to get a quick grasp of both the brands and their products, here is a quick comparison chart for you:

Cuchen vs Cuckoo Rice Cooker – Which One Is The Best?

Cuchen and Cuckoo are both well known for their smart rice cookers; I’ll talk about them in a bit. I’ll include the short bio of the companies, their products along with the features with the advantages and shortcomings as well.

About Of Cuchen Rice Cooker:L

Cuchen is one of the finest electronics manufacturers from South Korea who are specialized in rice cookers. Cuchen is the Original Equipment Manufacturers for leading brands like LG and Samsung for 40 years. They made the first touch LCD smart rice cooker with over 2000°C thermal spray. Their innovation in cooking appliances makes them stand out from regular brands. 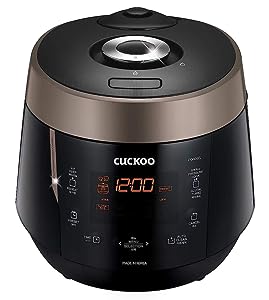 The Cuchen smart pressure cooker comes with all the modern smart features like an LED screen, automatic cooking, and cleaning. It also comes with a smart dial and quick menus for different cooking preset control. Along with the smart panel, You can control the cooker functions with your voice in three different languages English, Chinese, and Korean.

It offers multiple cooking presets for different meals like brown or plain rice, mixed and crunchy rice. All the presets can cook at three different levels, sticky, medium, and regular cooking. This rice cooker comes with 10 cups serving size, so the cooking is big enough to serve several persons. You can also make special dishes with its slow and steam cooking modes and preserve the taste as well.

For safety and quality, this cooker offers a sturdy build that is resistant to saltwater and sudden change in the temperature. It’s also resistant to sudden change for high pressure and scratches that ensures better durability. You can keep the cooker clean and navigate the cooking methods without even touching it!

About Of Cuckoo Rice Cooker:

Cuckoo is a Korean electronics manufacturer company, especially in kitchen appliances. They are specialized in manufacturing electronics with 14 years of experience and over 25 million sales of rice cookers around the world. The official distributor for Cuckoo here in the US is P&K USA Trading, based in New York City.

Cuckoo pressure rice cooker is well capable of giving you a headache-free experience with its smart cooking algorithms. Here are some of the most impressive features that take the Cuckoo rice cookers up to the line: 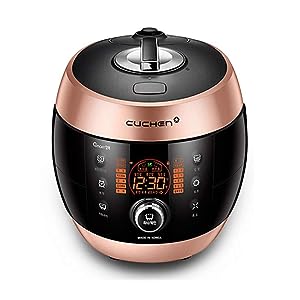 The Cuckoo 6-cup electric pressure rice cooker comes with 12 customizable cooking algorithms that you can make almost anything with it. You can cook from Sushi rice to chicken soap, even brad baking with this smart pressure rice cooker. What makes it even better is its interactive LED touch panel for cooking, which comes with customizable functionalities for cooking.

It works with a non-stick food holder pan inside, so your food won’t burn or stick to the bottom while cooking. The pan is also resistant to high pressure and temperature, as well as the opening lid of the cooker. The lid has a detachable stainless steel opening for better opening and cleaning.

For a seamless cleaning experience, it offers an automatic steam cleaning method that cleans the cooker itself with even the non-reachable areas. With so many automatic features like water drainage, auto safety reed switch, it is also one of the best Korean rice cookers. It gets even smarter with the voice control navigations system over the machine using three languages, English, Korean, and Chinese.

Which One Best For Me: Cuchen Vs Cuckoo Rice Cooker? [ Comparison]

Now, if you come to choose the best fit for your needs from both the pressure rice cookers from Cuchen and Cuckoo, it can be a daunting job. Nonetheless, I’ll put some perspective and a general comparison for you to understand which one you should go for:

Here are some of the most frequently asked question and answers that you might have in your mind:

Yes, Rice cookers are free from health hazard components and safe to use.

Cuckoo makes its rice cookers in its factory in South Korea and ships worldwide.

Cuckoo Rice cookers are sturdy enough to last 2-6 years, or even more if you take good care.

Choosing the best rice pressure cooker between Cuchen and Cuckoo is a big brainer for sure. They both offer some appealing, high-end features that are enough to confuse you. After reading this guide and review of the cuchen vs cuckoo rice cookers, you can now decide which features you need for your home.

However, if you want to know my point of view as an overall best rice cooker, I’d suggest you get the Cuchen 10 Cup Pressure Rice Cooker. Cuchen offers a bigger space inside the cooker to prepare more meals and keep it warm as well. It provides an LED screen with a smart knob for cooking functionality. You don’t have to go through a cleaning headache as it has an automatic steam cleaning technology!